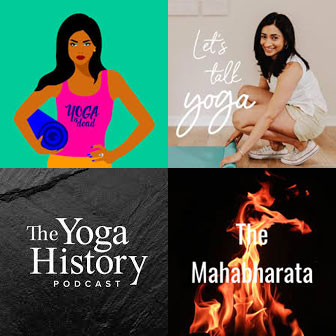 To say that 2020 was a tumultuous year would be an understatement. 2020 started with massive forest fires in Australia, and by mid-March COVID-19 had affected the whole globe. Black Lives Matter protests surged throughout the summer and a US election in November was nothing short of a circus. Luckily for us we have yoga, but what does that mean exactly?

At one of our Association board meetings, one of our BIPOC members reminded us that we have a responsibility to ensure that our yoga community is inclusive and welcoming to all people regardless of gender, race, religion, age or ability. This prompted many discussions and through these, I discovered a great podcast called Yoga is Dead. Hosted by Tejal Patel and Jessa Parikh, this podcast is a very well researched and comprehensive dialogue between the two show hosts. Their views as South Asian yoga teachers and practitioners living in the US is illuminating. They openly discuss how they were disregarded and dismissed even though yoga originated in India! The idea and concept that yoga in the west has been appropriated is widely discussed. In addition, each episode comes with a huge number of resources allowing listeners to learn more about any subject.

In less than a few days I was finished with season 1 and needed to learn more. Tejal and Jessa mentioned that they had been interviewed on the Let’s Talk Yoga podcast, so I headed that way and was introduced to Arundhati Baitmangalkar, a yoga teacher originally from Mumbai and now living in Seattle. Through her podcast I was introduced to Afrin Sopariwala ex-google engineer turned Ayurveda practitioner and Madhura Bhagwat who was incredibly helpful in discussing and explaining cultural appropriation in yoga. Arundhati also had a fun episode discussing the history of yoga with Colin Hall. Colin is a lecturer in religious studies at the University of Regina and the host of The Yoga History Podcast.

The interview with Colin was so delightful that I had to look up his podcast. (Can you start visualizing the huge rabbit hole?) Colin does come clean in episode one. He is a white person and doesn’t claim to know it all. He also doesn’t read sanskrit and only has access to translations, but he openly admits this and gives credit where credit is due. One of the episodes is devoted to the Bhagavad Gita and how it’s taught in teacher training classes. He concludes this episode by stating that he hopes teacher trainees will take more time to study the Gita and learn all there is to learn from that great text… So what did I do…  found another podcast of course.

The Bhagavad Gita is just one story from the sixth volume of The Mahabharata. It’s estimated that if one were to read the entire 18 volumes of this great epic, it would require 6 months of solid reading without sleeping, eating and not caring much about personal hygiene. We also know that originally when it was told, it took 12 years to tell. The Mahabharata podcast is hosted by professor Arti Dhand of the Department for the Study of Religion at the University of Toronto. Arti admits in this interview that the idea of the podcast came about due to COVID-19 boredom. She hopes that her retelling of the story may not take 12 years, but as I’m writing this, we are only 27 episodes in and I don’t think that we’ve finished volume one yet.

In some ways, I’m grateful for COVID-19 slowing down my life and introducing me to these podcasts. I also attended a few yoga philosophy lectures and appreciated the efforts of the presenters. For me, my yoga wouldn’t be the same without the philosophical aspect and I feel as if I’ve just scratched the surface and exposed all sorts of wonders.