I recently watched Eckhart Tolle on Racism, Ego and Awareness,  on YouTube where Tolle tackles a big question pertinent to our time: how can those of us on the path to spiritual awakening address racism and help to dismantle systemic racism? As I listened to Tolle’s message, I couldn’t help but notice many parallels to the Yoga Sutras of Patanjali.

“I look to a day when people will not be judged by the color of their skin, but by the content of their character.”
– Martin Luther King, Jr

How do we discern character asks Tolle? He says that the most important realization for any human being – and it is a Spiritual realization – is that their character is essentially invisible. What you see on the surface (the physical body) is a superficial phenomenon. When you meet someone, you are meeting the judgments in your mind, in your ego. This can create immense suffering. Only when one becomes aware of this and overcomes these egoic obstacles can they look at another human being, look beyond the external appearance of that being, and sense their true character: their innermost essence.

The Yoga Sutras of Patanjali is a step by step guide, composed of 196 aphorisms that describe the yogic path to enlightenment. The path leads to the spiritual realization that Eckhart talks about – beyond the ego – and toward the innermost essence or character that King talks about. In the Yoga Sutras, it is the true Self who is to be discovered and known. Different words, same idea.

In B.K.S. Iyengar’s book, Light on the Yoga Sutras of Patanjali, yoga is described in sutra 1.1 atha yoganusasanam, as an art, a science and a philosophy that is “given to humanity for the exploration and recognition of that hidden part of man which is beyond the awareness of the senses’. Just as Tolle talks about one’s character being invisible, so too does Patanjali, using the word “hidden”.

Tolle explains that the ego seeks to assert superiority by judging people by their external features. For instance, if you meet someone of another race, especially a minority, the ego can make you feel superior…even if you are not particularly intelligent!

Sutra 11.3 avidya asmita raga dvesa abhinivesah klesah describes five afflictions
which disturb the equilibrium of consciousness: ignorance or lack of wisdom, ego, pride of the ego or the sense of ‘I’, attachment to pleasure, aversion to pain, fear of death and clinging to life.

Sutra 1.2 yogah cittavrtti nirodhaha
Yoga is the cessation of movements in the consciousness.

With self-discipline and earnest practice, the sadhaka learns to still the temptations of the ego and the fluctuations of the consciousness. This stillness “leads to deep silence, with awareness”.

With constant yogic practice comes true knowledge. The ego is destroyed, along with the pain that it causes to one’s self and to others. The true Self is in sight.

Without giving too much more of the video away, Eckart Tolle does give some genuine and timely insights into systemic racism and how to deal with one’s own emotions and reactions. 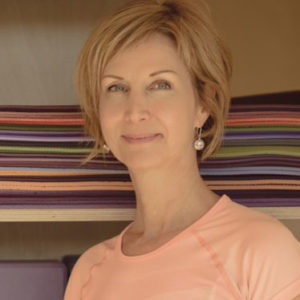 Terri Damiani has been teaching yoga in the Iyengar lineage since 2004. Certified at an IJ2 level, she approaches her practice much the same as she approaches life—with curiosity, exploration, and joy.